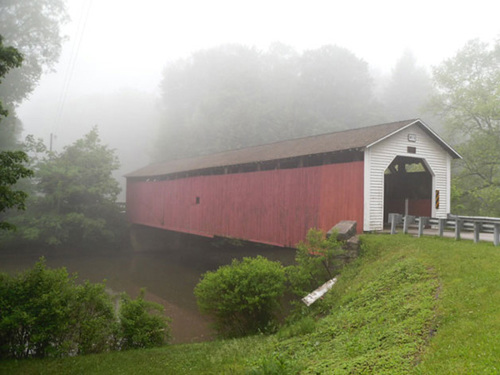 KISSING BRIDGES – Growing up near an 18th, century grain mill and a 19th, century timber-covered bridge parallels images out of Tolkien’s story ‘The Hobbit’. Old covered bridges are a sure landmark of ancient paths and portals through which many carriage wheels and hoofs have crossed.

ARCHED TRUSSES – On adventurous summer days, we would climb all around on the bridge trusses, especially the big long arched trusses that traversed the full length. Since then, it has been replaced with a modern bridge. In memory or imagination, covered bridges conjure up romantic memories and amusing thoughts of gentle country life years ago.

VIRGINIA'S COVERED BRIDGES – Also known as "kissing bridges" - numbered more than 100 back in the early 1900s. Today in Virginia, only eight covered bridges still stand. Five have been preserved as landmarks and three are on private property. You are invited to visit these picturesque structures that span time and the small quiet creeks along Virginia’s rural countryside.

THE CONCEPT – Updating your business to a 21st, century standard is critical. Highlighting your company’s historical beginnings reveals a lasting impression. Your most urgent cause must be future-proofing your company with dynamic online activity. It involves content that tells your unique entrepreneurial story. That is what customers love to believe in.