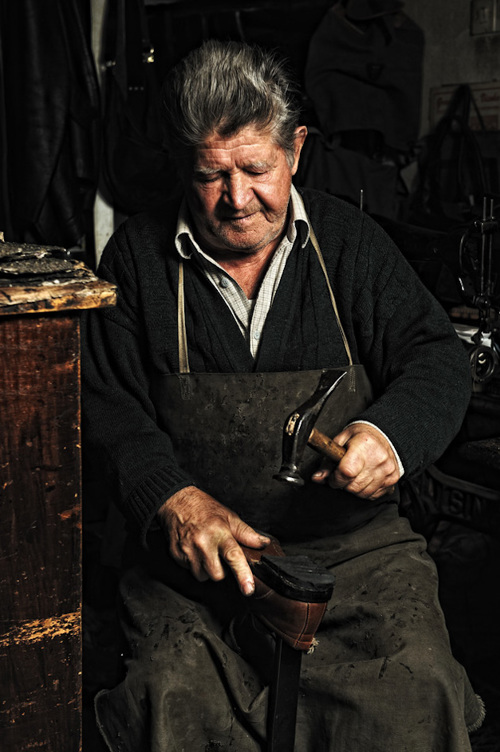 TENDING YOUR VILLAGE – The atmosphere at Tubby’s Shoe & Leather was robust with vigorous conversations accented by the cobblers roaring machines and tap-tap-taping, along with robust aromas. It became the hub for town business relationships making his shop a popular and busy old-world style trading post. Instinctively, Mr. Staub balanced his business branding with meaningful human interest content and likable personality traits. This is old-world village relationship building, still the rock of good business – It’s not about selling, it’s connecting and building relationships – building lasting impressions with patrons. These are the values customers love to believe in.

HEELS AND SOLES – ”This is a very unique trade and the only way to master it is if you have it in your blood (unknown).” Master Cobbler, Tubby Staub had the trade passion. His tiny building on Center Square New Oxford PA, Staub’s Shoe Repair was a bustling hub of repair work, shoe shines, fresh roasted peanuts, and a soapbox for town politics. As toddlers my brother Jerry and I would wander over from Dad’s men's clothing store next-door to Tubby’s for a daily visit. Jerry-Who and Billy-Do he called us, making us giggle with funny comments and handing out candy and peanuts. The peanuts were fresh roasted every Friday in his 50-gallon roaster. We would sit on the big elevated shoe-shine chairs watching the noisy machines at work and his vigorous hammering, cutting, and glueing all the leather heels and soles. It was said that one could hear Tubby’s voice on the other side of the square. He had to talk over the noisy machines which may have made him a little deaf after many years of cobbling. It seemed like customers would linger a long while after picking up repairs just for the conversations and story telling. Today, memories flash back into my mind whenever the rich smells of worked leather, rubber cement, and freshly roasted peanuts trigger my olfactory senses. 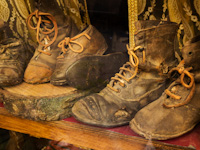 AROMA WHIFF – During childhood we create a multitude of memories that are triggered by particular smells. One specific smell can bring on a flood of memories. It’s an instantaneous emotional response whenever these aromas whiff through our senses. Smell is perhaps the one sense we are least comfortable with talking about. Describing how things look, or how something sounded comes easy with names but with smells we struggle trying to describe them by using associated smells – smells like cut grass or baked bread, for instance. Names for smells are usually from the source that produces that smell, such as apple, coconut, or mesquite.