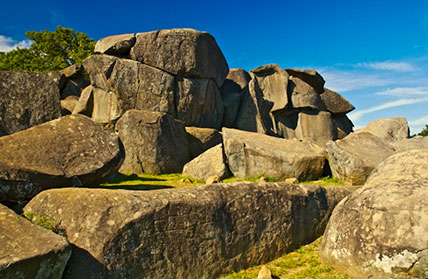 DEVIL’S DEN – Our Cousins, the Baker’s lived right next to the Civil War era Gettysburg Battlefield, Peach Orchard.  With their close backyard-proximity, we had direct bicycle access to the entire national military park. Discovering the Civil War became a summertime adventure when we were kids. There were many summer days spent cruising for miles on our bikes exploring summit tops, steep slopes, fishing creeks, monuments, artillery commands, and the massive boulders at Devil’s Den. Crawling through and around the caves and huge cracks at Devil’s Den was a lot of fun as 10-year-old boys. I have plenty of fun memories growing up exploring that national park.  However, today 150 years since that Civil War battle, my attitude leans much toward sorrowful sentiment for any human conflict of war.

GHOSTS – There were two companies of sharpshooters (about 200 men) positioned among the boulders at Devil’s’ Den along with 2,000 volunteer infantrymen. Devil’s Den is the site of one of the most horrific conflicts of the Battle of Gettysburg in July of 1863.  Devil’s’ Den is considered America’s most haunted grounds because of the morbid massacre that had occurred there. Paranormal activity is often reported with spooky stories about shadows or transparent apparitions appearing on horseback. Nearby Little Round Top and Devil’s Den was part of major assaults during the second day of battle.  The Plum Run Valley between Houck's Ridge and the Round Tops earned the name Valley of Death on that day.

THE CONCEPT – Some say business is like war. Thank God brutal hand-to-hand combat is not the norm though. Internet business is like discovering summit tops and exploring through vast national parks. Does your business have the close backyard proximity to - and direct access to - the entire global market place? Be careful not to become a casualty or fall a historic romantic failing to move ahead beyond traditional 20th century brick and mortar business. Advancing your company into online activity must become your most urgent push forward. Online business and digital marketing involves content that tells your personal story. That’s what customers love to believe in. Get answers to your E Commerce and online marketing questions.